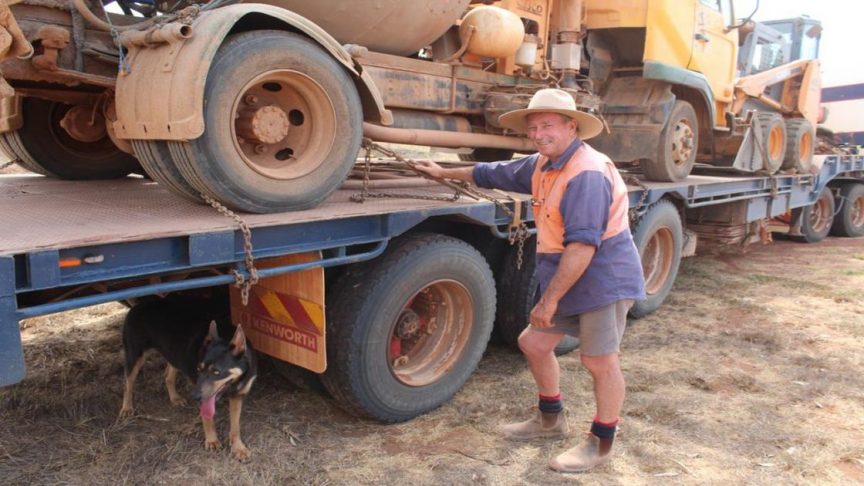 Well-known veteran Australian outback truckie Steve Grahame says that while owner operators are already feeling the pinch of rising fuel costs – he believes the effects are likely to get worse in coming weeks. “The price of fuel is going through the roof. My personal thought is that it’s going to be very, very difficult for single truck owner operators in the next few months,” he said.

“They had their fuel rebate reduced to virtually nil, now they’re coming up to their BAS for the end of June and when they do it, that’s when the shit is going to hit the fan for many and they’re really going to feel it.”

Grahame drives a 1994 Kenworth C501, which he’s had for over 20 years. It may not feature all of the bells and whistles of the newer trucks, but that’s how he likes it. It has over 2.5 million kilometres on the clock and over the years, it’s pretty much been rebuilt from front to back.

His main work is delivering building supplies and various other essentials to some of the most remote communities of Australia’s outback. Based in Perth, he generally runs into the Northern Territory.

“It’s a difficult time for owner operators and small fleets. We’re still going alright here but that’s because we’re remote area cartage,” said Grahame, adding that he’s had to pass on the price increases to his customers. “My fuel burn average is 1.2 kilometres to the litre. It’s not hard to work out that if fuel goes up 40 cents a litre, it’s costing me an extra 40 cents a litre.

“Perth to Darwin is 4400 kilometres each way and if we’re paying 40 cents a litre more, it very quickly adds up. My prices are based on $1.50 a litre, so at the moment it’s costing an extra $4400 for the return trip. If prices were based at $1.50 a litre, which most people were at the start of this year, you can’t tell me there’s any owner driver out there who can afford to absorb a cost increase like that – and we don’t, we have to pass it on.

“I’m not prepared to wear the impost of the increased cost of fuel. I’ve had to pass it on in the form of a surcharge or levy. In nearly every case my customers have been unhappy to hear about it because they’re running businesses too, but they are understanding of the situation.

“While some do ask me if I can absorb it, I have to tell them that I can’t – and I feel sorry for them, because the construction companies have problems at the moment too, not only with supplies but also with a lot of their tradespeople who are seeing that the grass is greener in the big smoke, so because of a difficulty in getting workers, tradies are charging what they like. The construction companies in these remote areas just can’t get the employees at the moment.”

Like most operators, Grahame would like to see the fuel tax credit initiative reinstated. But in the interim, hopes that sub-contractors are also being looked after. “I’m positive that the major carriers of this country would be imposing fuel surcharges and levies to their customers, and that has to be passed down to their sub-contractors. And where it’s not, those who are sub-contracting to these companies really have to put their heels down and demand that it is passed on.”

Though Grahame is hopeful more can be done. He believes the only answer to the problem is more fuel supply. “Many blame the war in Ukraine for the fuel price increases, but I feel like there’s massive reserves around. The oil producing people, OPEC (Organization of the Petroleum Exporting Countries), made a statement that they can’t open the valves too quickly or it will bugger up the system.