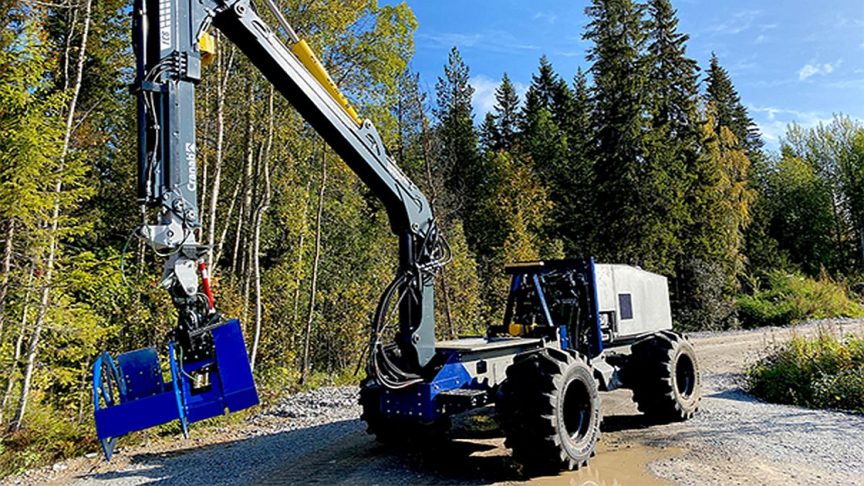 In Sweden, researchers at Luleå University of Technology (LUT) have designed and built an autonomous forest machine that they say is now ready for in the woods field testing. “We have replaced everything that humans do with intelligence on the machine; with computers working together and controlling it. We have created conditions for the machine to be better than humans, and will now test that,” said Magnus Karlberg, Professor of Machine Design at Luleå University of Technology.

In 2014, Professor Karlberg and his colleagues began sketching on the autonomous terrain vehicle that can be used as a research platform. Since then, Karlberg and other researchers and students at the university have worked to make the vehicle as smart and robust as possible. Luleå University of Technology (LUT) has collaborated with a number of academic and indústry stakeholders in the development of the autonomous terrain vehicle including Poclain Hydraulics, Swedish University of Agricultural Sciences (SLU), Forestry Cluster, Holmen Skog, SCA, Sveaskog, Norra Skogsägarna, Parker, Nord-Lock, Expander, and Olofsfors. Now it’s ready for the forest.

The purpose is to conduct tests in a number of areas to develop autonomous technology for machines and other equipment used in agriculture and forestry. It is a unique machine – there is no other like it in the world as far as we know, said Magnus Karlberg.The ten-tonne machine can be controlled with a remote control but also be programmed to perform work entirely on its own. The machine is currently powered by biodiesel and is built without a cab, but with a conventional powertrain, crane, pendulum arms, and sensors.

An autonomous vehicle must be able to perceive its surroundings. We have equipped the machine with sensors so that it can make good decisions and to increase safety. For example, if a person gets too close, the machine should turn itself off, explained Magnus Karlberg. The autonomous terrain vehicle opens up for a number of research collaborations with, among others, forestry companies and universities in Sweden and abroad. The researchers are for example investigating how site preparation (e.g. scarification) and transport of logging residues can be done in a more sustainable way.

In the forest, soil damage is a major concern and we want to significantly reduce the proportion of area that is affected. In one of our projects, we are working together with Swedish forest companies to do soil preparation in a completely different way than is done today. We also study productivity. How is it possible to make various operations efficient and cheap, but also environmentally considerate and socially acceptable? We work with research questions to meet these challenges. With the machine, we can do tests and see that it works in reality and not just in a computer environment, said Magnus Karlberg.

Professor Karlberg is convinced that autonomous terrain vehicles will change agriculture and forestry but that it is still a number of years away before these types of vehicles becomes common in Swedish forests. Man will be present even when these vehicles go autonomously in the forest but will do other things. Instead of sitting in the cab, you may be some distance away and control several vehicles via remote controls, envisioned Magnus Karlberg.