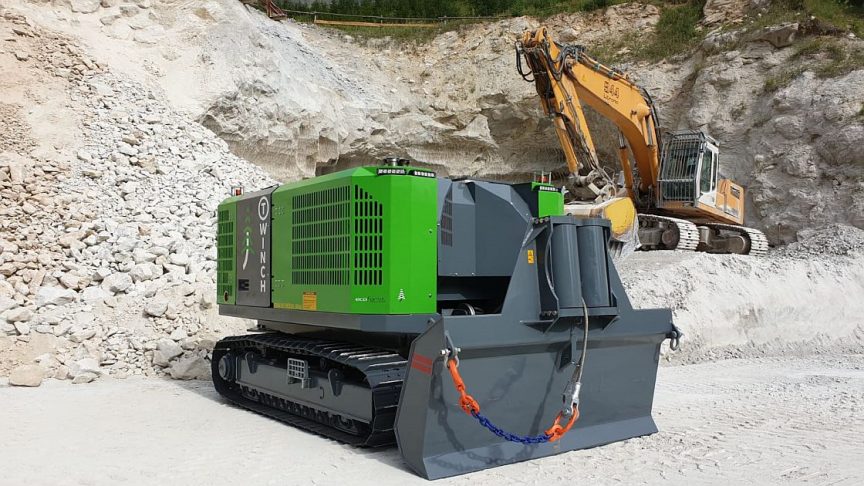 The T-WINCH traction assist machine was unveiled to local logging contractors at the HarvestTECH 2019 event in New Zealand few weeks ago. With the first cab-free T-WINCH machine already working in New Zealand, a new and larger model has just been developed which should be well suited to markets like ours.

A forestry operation north of Gisborne has been operating the first European-made T-WINCH, a 10.2, for a number of months to provide winch assistance to a skidder tackling steep hills with a full load. ecoforst, the innovative Austrian company that produces the T-WINCH, has developed the larger 30-tonne model called the 20.2, and nicknamed ‘The Big One’ for big machine markets like New Zealand.

Local T-WINCH distributor, FORCO, believes New Zealand contractors may prefer ‘The Big One’ for tethering large tracked felling machines. Ian Wilton, Business Director with FORCO, says this larger model has been in development for some time and was originally called the 15.1, but further testing in Chile saw ecoforst add more horsepower, more strength and heavier guarding, prompting the name change to T-WINCH 20.2.

“Building on the launch of the T-WINCH 10.2 worldwide last year, with T-WINCH 10.2 number three out of the factory working in New Zealand, ecoforst will launch it’s much anticipated T-WINCH 20.2 in October this year,” says Ian. The T-WINCH 20.2 specifications are impressive, with a 414 horsepower engine, 560 metres of 26mm rope, 15 tonnes pulling force and up to 8km/h line speed.

The T-WINCH 20.2 is controlled with the same fully automated technology as used in the 10.2. It is compatible with any machine because no installation is required, simply hook on to any machine and begin operating. The remote handset, which stays with the operator, controls all T-WINCH functions. The operator sets the pulling force once and can work all day without touching the remote again, if the tethered machine moves away from the winch it will let rope out, if the tethered machine moves towards the winch it will pull rope in, all while maintaining the selected pulling force.

Check out the latest video of the new machine in action.