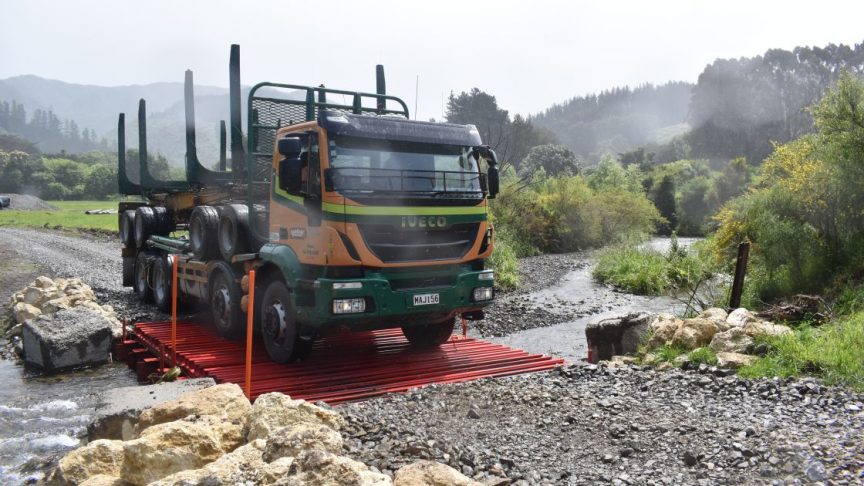 A Wairarapa-based forestry company are paving the way with stream crossing bridges that don’t disturb the waterway. Josh Blazek and Guy Farman of Farman Turkington Forestry came up with the design over a series of prototypes.

Farman said forestry had always had issues with trucks crossing water and keeping the water clean, and they set out to find a solution to the problem. He said the 3.5-tonne“blaze-it bridge”, named after Blazek, massively reduced environmental impacts compared to other options.

“In most cases, you’d build a bridge, a ford, or you’d install a culvert.” Farman said a great thing about the bridges was that they didn’t disturb the stream bed upon installation nor from trucks driving over it. The effects on the stream environment when installed are very minor.“When a vehicle drives through a ford, it is going to create some stream disturbance.”Blazek said the bridges also reduced flooding risk at the crossing.

“Flood engineers were worried we’d catch debris that would build a dam and then fail, which is a common issue with bridges, especially culverts. If you catch heaps of slash or anything that may come down as sticks from the headwaters, they can easily move over the top of it.”Blazek said because of this, high river flows weren’t nearly as much of a problem anymore.

“The bridge is one of the rare things that’s environmentally advantageous, helps loggers and truck drivers, and is cheaper.” He said it was also possible to put two bridges side-by-side to extend the distance it covered. Farman said Blazek had been inspired by the Ernslaw One bridge that had won multiple prizes.

He said the design had been similar, but theirs was made of wood, and he was worried about it breaking under the weight of a logging truck. “If you cracked any of the timber, it’ll just start falling apart.” Blazek said they had come up with their own, very modified design to fit their own needs. “We need to be able to put in in and take it out again for the next job.”

He said their bridge could be moved in a transporter without any pilot vehicles and could be installed by a standard digger in about an hour. Farman said an idea had sprung when had done a logging job where they had damaged a cattle stop and had to replace it, “the damaged cattle stop was dropped off here, we looked at it and came to the conclusion that it could be a good base for our design”.

Blazek and Farman then decided to build their bridge from steel; most of it now comes from the likes of recycled railway irons. Blazek said there was a need for it, especially during fish spawning when rules prevented vehicles from crossing waterways for up to three months at a time. “At spawning, you can only have up to 20 axel movements, which is one truck and one ute a day. We can see ten trucks in and out of a site per day at times.”

He said a previous logging job years ago up the valley had seen far more sediment discharge down the stream, and neighbours were surprised that work had started without any discharge noticed in the stream. Farman said the bridge was now consented by Greater Wellington Regional Council.

“Under the environmental rules, it’s quite hard to define if it’s a ford or a drift deck.”Farman Turkington Forestry currently has six blaze-it bridges, with a couple more on the way. Blazek and Farman said the bridges were manufactured locally at their Carterton base. They said they were considering eventually leasing the bridges to others that would have an interest in using them.

Note: In line with this initiative, details are out now on New Zealand’s first Environmental Forestry event planned for environmental forester’s on 10-11 May 2022. Details on next year’s event can be found on the event website