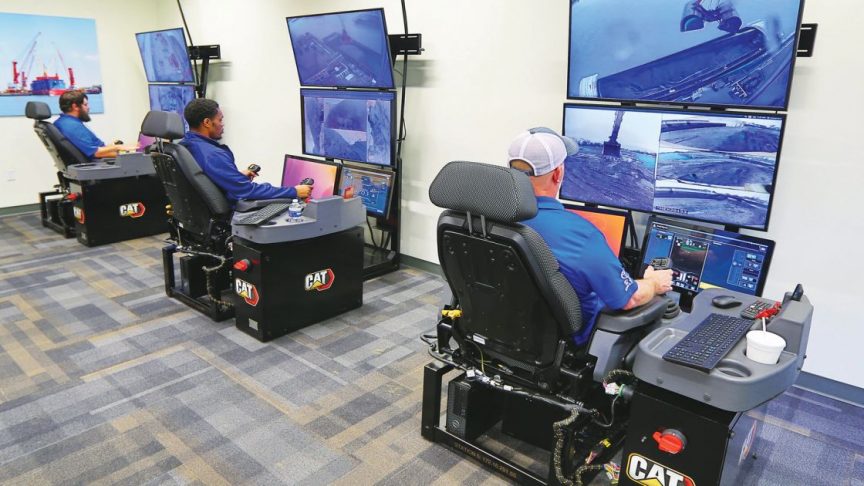 Think of the work being done at the moment around remote controlled log hauler operations – keeping those working on steeper forest slopes safe. This work is ongoing – but the targets already set. In a similar vein, Caterpillar has launched its remote-control system for large excavator models into the North American and Japanese construction equipment markets. Designed to remove machine operators from dangerous work sites – such as quarrying and demolition and decommissioning activities – Cat Command for Excavating can now be used with six excavator models in the 20 to 40 tonne class.

Both new and existing Cat 320, 323, 326, 330, 336 and 340 excavators can be fitted with the technology, via a ‘Command-ready’ field kit installed by the manufacturer’s authorised dealers. The world’s largest OEM by sales says that the new Cat Command for Excavating system allows the machines to be used with “either line-of-sight or non-line-of-sight remote operating configurations”.

The ‘Command-ready’ kit, which is installed on top of the cab, comprises multiple cameras for non-line-of-site operation from the Command station, indicator lights, a microphone, wireless receiver, and an antenna. In addition to aiding the training of less experienced machine operators, Cat said its remote-control system also “offers a solution to workforce shortages by opening opportunities to those with physical limitations that prevent them from climbing into the equipment.”

The line-of-sight configuration allows onsite operators to control the excavator from up to 400m away, using a lightweight console with a shoulder harness. Capable of controlling “all excavator functions with virtually no response delay”, Cat described the console as ideal for temporary or emergency applications, as work sites do not require any communications infrastructure to use it.

Operation of the excavators can also be changed from remote to manual operation using a ground-level switch. Unlike the handheld console, the non-line-of-sight configuration is an office-based set up that uses Cat’s Command station. It enables operators to control up to five different machines (one at time) on sites that are located miles away, via the contractor’s wireless network.

The Command station, which simulates the cab of the excavator, comprises a joystick, foot pedal controls and touchscreen monitors. Cameras fitted on the excavators provide the office-based operator with multiple views of the machine and worksite via a universal screen setup.

Cat said, “With users comfortably controlling dig, lift and tracking functions from a safe location, Command for Excavating enables production to restart immediately following disruptive processes, such as blasting in quarry applications. “It also enhances safety and improves machine productivity on a range of projects like operating in unstable underfoot conditions, brownfields, shore work, demolition and site decommissioning, and stevedoring.”

According to the manufacturer, the technology could help to attract a new generation of workers and increase the “longevity of experienced operators”.