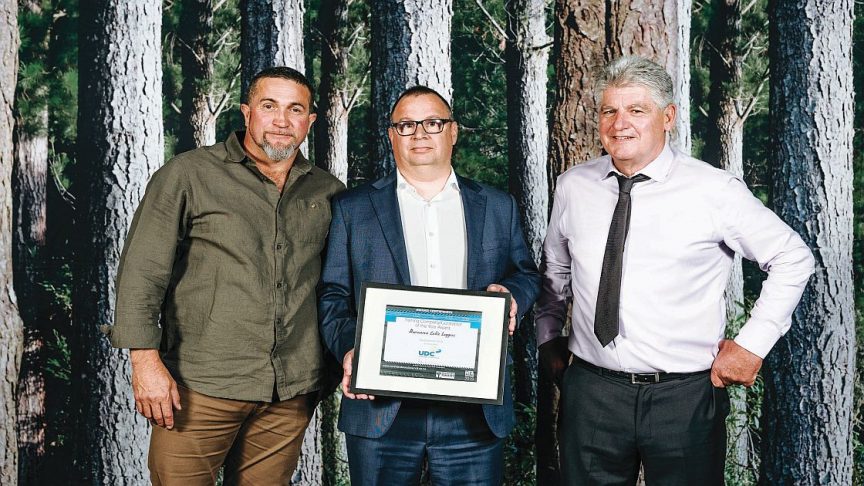 Rosewarne Cable Loggers (RCL) was one of the big winners at the recent 2019 Northland Forestry Awards taking out the UDC Training Company/Contractor of the Year crown. Company health and safety coordinator Kerry Pellegrom says that the win demonstrates RCL’s successful and purposeful commitment to people development through industry training.

“Our aim is to have a multi-skilled workforce as training leads to a higher quality workforce, which is a benefit to both our workers and the forestry industry in general,” she explains. RCL employs its own in-house trainer assessor, Karl Bowman, and training is embedded in everyday workplace activities.

Kerry says that RCL works with its crews to develop training plans for new workers as well as up-skilling existing workers who wish to further their knowledge and practical experience. In 2013 RCL changed the way it handed out their National Certs and certificates to greater acknowledge the achievement: they are now presented at the Safe Start breakfast.

As well as NZQA unit standards the company also assists it crews with Health and Safety training, helping them to develop a system that is not only compliant but easy to understand and user friendly. Kerry says that RCL is innovative in its work practices, adopting new work methods for the safety of its people and the benefit to production.

For example, she says that being the manufacturers of ROB (Remote Operated Bulldozer), RCL has up-skilled not only its own mechanical faller operators but those of other contractors who have purchased the machines. Other training initiatives include RCL foreman and crew leaders participating in leadership courses run by forest owners and over the past two years, three of the company’s foremen have become crew owners and five of its tree fallers have become contract cutters working in the Northland region.

Rosewarne Cable Loggers was formed when Lars and Fiona Rosewarne secured key supplier contract to Carter Holt Harvey in 1997. In 2006 when Carter Holt Harvey put their forest up for sale RCL remained with the new forest owners Hancock Forest Management and Rayonier NZ Ltd and split their crews between them.

RCL is headed by Lars and backed up by his brothers, Colin and Brian who own their own hauler crews. Lars’ son Luke has recently come into the family business, initially as a foreman and this year owning his own swing yarder crew.

“RCL has a strong mix of practical management and business skills coupled with modern leading-edge machinery. As a package, this gives us a high level of performance in all aspects of the harvesting operations,” says Kerry. Currently RCL consist of 12 logging crews, predominantly hauler crews with a couple of fully mechanised ground-based crews.

RCL acknowledges the important contribution that contractors play in the success of their business. Kerry says it was gratifying to see Paton Logging winning the AB Equipment Individual Harvesting Excellence Award and Phillips Logging securing the Wise on Wood Outstanding Environmental Management Trophy at the 2019 Northland Forestry Awards.