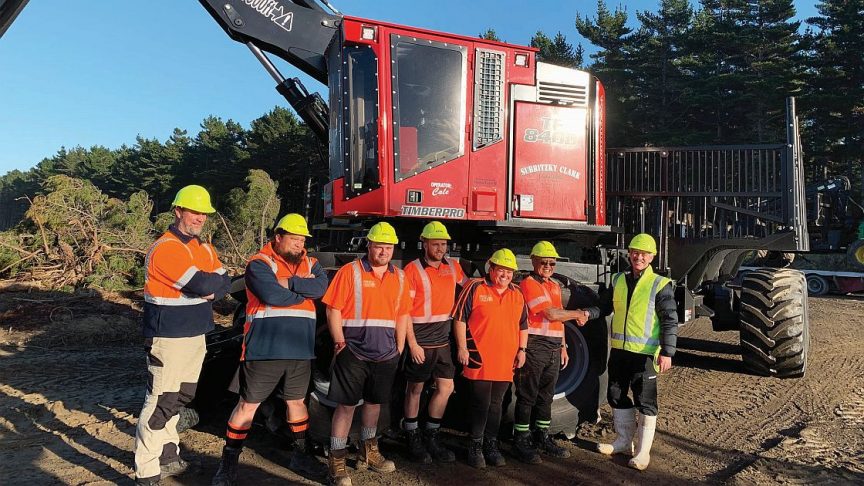 Love, care and a true family spirit are at the heart of Subritzky Clark Logging’s successful Northland operation, New Zealand. Winning last year’s Forestry Family of the Year at the Northland Forestry Awards was proof of the pudding that family does matter.

Owned by Willy and Bronwyn Subritzky Clark, the logging business operates a four-man crew, including the couple’s twin sons – Cale and Dane – along with Sid Leese and Kevin Jobe. While not blood family members Sid and Kevin are considered very much part of the family.

“That family spirit makes all the difference to the way the business operates,” says Bronwyn. “We have a really good crew culture and we hear it all the time from outsiders who come on to the skid and enjoy a laugh with the boys.”

Cale and Dane have been part of the family firm since leaving school seven years ago—Dale is now foreman and Cale is 2IC. With Willy providing leadership, wisdom and a helping hand when he is not chasing a ball around the golf course, Bronwyn plays Camp Mother overseeing the health and safety of her family out in the bush—a role she has had for the last five years.

“She can be grumpy sometimes too,” says Willy. “Well,” replies Bronwyn. “I have some people who don’t always listen—not naming names but there is one really old school logger in there and he doesn’t like change—but I do get my way in the end.”

Subritzky Clark Logging has been in business since 2001 when Willy accepted a contract with Juken Nissho working in a local processing mill. In those days the business had one very second hand 10-tonne Hitachi Excavator a fourth-hand Toyota Hi-Ace crew truck, with a crew of three working 24 hours/seven days a week, doing 12-hour shifts.

“We have two logging harvesters, which are excavators with a felling head attached to them. They fell the tree, take the branches off and cut the tree into certain lengths. We have a wheeled forwarder with a crane on the back and driver in a cab loading logs. We also have another loader which is like an excavator but it sits on the skids and loads logs onto the truck.”

With a daily target of 220 tonnes of harvested and processed tree stems, Subritzky Clark’s contract is for post wood, mainly for the domestic market and a local mill in Keri Keri. “Summit has been very good to us,” says Willy. “They’re a very family-orientated business and they like our family operation. They were the ones who encouraged us to bring the boys on as greenhorns straight from school and for Bronwyn to join the business to look after health and safety.”

“Summit has watched us blossom,” adds Bronwyn. “They nominated us for the award, which was really cool. They had seen our struggle over the years when Willy was sub-contracting to other companies. Winning the award was a big boost for the boys -well all of us – but them in particular.”

Willy and Bronwyn took the entire team and partners to the Awards evening in Whangarei last year and made a weekend of it. “We don’t do that often – we don’t have the opportunity to all get together that often,” explains Bronwyn. “I felt elated when the win was announced. It was unexpected but awesome because the entire crew was there to go up on stage and accept the award.”

Great story well done to all the family