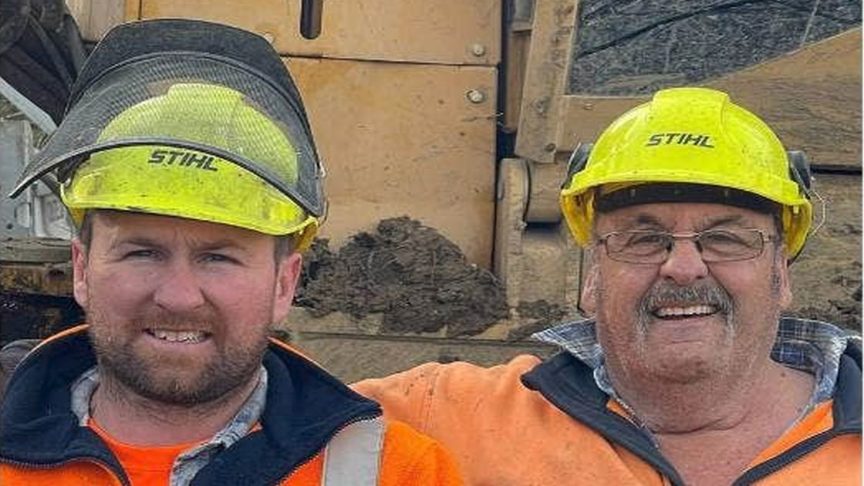 A father and son duo from Southland have shown there’s value in getting back to the books, even after four decades in the game. Bobby Baird and his 65-year-old father Robert completed their Level 4 New Zealand Certificate in Forest Harvesting with Competenz together in May.

All employees went through the forestry training together alongside the Bairds and received their qualifications at the Southern Wood Council Forestry Awards ceremony held in Dunedin. Robert had practical experience gained during four decades in the bush and said the vocational training included in the certificate was helping keep people safe.

“When I started out in the industry there was nothing like this training. People were getting hurt,” he said. “Training and putting people on courses improves safety – it helps people understand the dangers. Some of the younger guys raise their eyebrows when I tell them the stories about the old-timers.”

Bobby said the staff was processing 480 to 600 tonnes of logs every day. “They’re a great crew,” Bobby said. “Everyone gets on with the job and I don’t have to manage them – they know what they’re doing.”

Bobby had been studying throughout his working life and said Neville Mueller from Competenz had made the whole learning experience simple for everybody. He said Robert, who previously wasn’t looking forward to all the paperwork involved with studying, was now reconsidering his recent choice to retire after going through the course as a team.

“He made lots of big noises about retirement,” he said, “but it’s really good, we’re a close-knit team.”