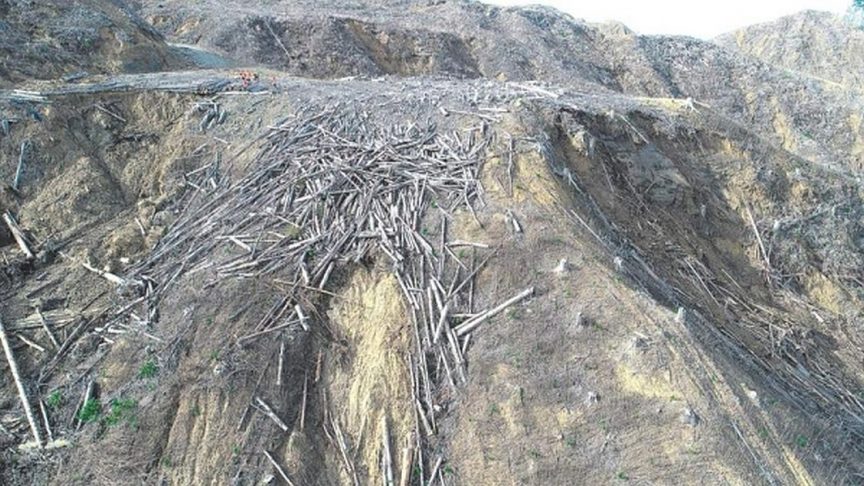 Forest management company PF Olsen has been fined NZ$198,000 for poor harvesting practices that contributed to the devastation caused by forestry waste at Tolaga Bay in June, 2018. The company was sentenced by Environment Court Judge Brian Dwyer in Gisborne on 15 September.

It pleaded guilty earlier this year — a day ahead of a scheduled judge alone trial — to a Resource Management Act charge that between June, 2017, and June, 2018, it discharged contaminant, namely sediment and forestry waste, on to land at Paroa Forest in circumstances where it could (and did) enter water.

The offence is punishable by a fine of up to $600,000. All but 10 percent of the fine will go to Gisborne District Council. Paroa Forest is an 1800-hectare plantation forest to the west of Tolaga Bay, owned by Permanent Forests Limited, and one of thousands of forests across New Zealand managed by PF Olsen.

Terrain is steep and prone to severe erosion. The Tapuae and Waipurupuru streams flow through it. These and other tributaries flow from the forest into Uawa River. The company was the holder of four consents authorising the usual work associated with forest harvesting, and none of which allowed discharge of forest waste to water or to land where it could enter water.

Tolaga Bay was hard hit by the first of two storms in the region in June, 2018. Heavy rain caused severe flooding in the nearby Tupuae catchment on June 3 and 4 and the mobilisation of a huge volume of sediment and wood debris from the area’s plantation forests. An estimated 47,000m3 of woody debris smothered Tolaga Bay beach, with significant but unknown quantities of woody debris deposited elsewhere in the Uawa catchment.

Council officers who inspected Paroa Forest later that month identified numerous shortcomings in forest management practice. According to an agreed summary of facts, the majority of damage caused by sediment and forestry debris at Paroa Forest was the consequence of collapse of soft erodible soils rather than skid site collapse which gives rise to this charge against the company.

However, it was apparent from photos that considerable amounts of forestry waste and sediment were mobilised from skid sites and inevitably made their way to water. Inspectors noted seven skid sites had inadequate drainage contrary to resource consent conditions, there were unstable accumulations of slash on two skid sites, unstable slash was left on the sides of five skids sites, and a culvert had not been flumed properly.

The flow of debris from Paroa Forest damaged Paroa Station, immediately downstream. Permanent Forests has already paid NZ$388,000 for remediation and the owners anticipate there is still another NZ$150,000 work to be done.