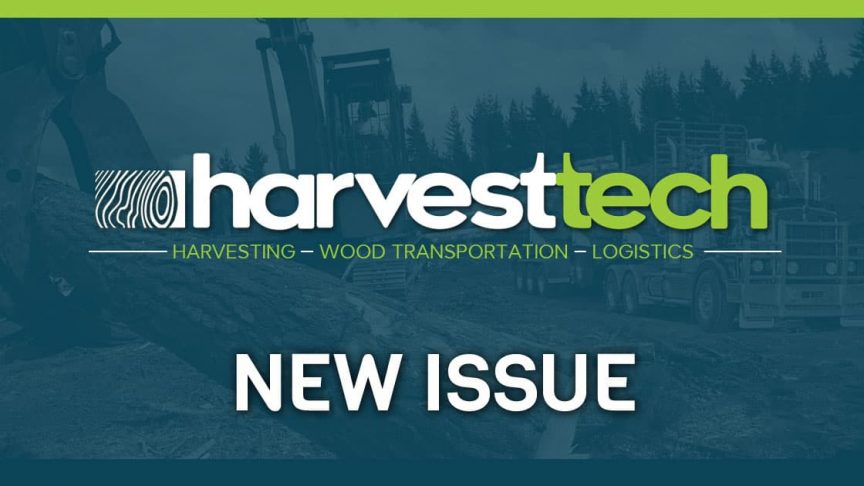 Welcome to the latest issues of HarvestTECH.News.

As part of the record turnout of forestry and wood harvesting companies at the recent Residues2Revenues 2022 event in New Zealand, the very latest equipment and systems being used to harvest, process, segregate and transport forest slash and bin-wood were able to be showcased.

As a follow-up to the biofuels event, this month OneFortyOne’s New Zealand’s Kaituna Sawmill has announced that they’ve just signed an agreement to export wood chips to Japan with the first vessel expected to depart from Port Marlborough (Picton) before the end of this year. The trial has been three years in the making and it enables the mill to diversify their wood residues market. The Pedersen Group that operates three facilities across New Zealand and Australia has also just unveiled a new Nicholson A5 Series debarker (annual capacity of 600,000 tonnes) that they’ll be operating, removing bark from export logs as an alternative to methyl bromide treatment.

And in our last issue we covered stories of Scania who’d just rolled out the world’s first electric log truck, a battery-powered truck with an 80-tonne capacity along with New Zealand’s first hydrogen truck that had just begun operation. Developments in wood transport and harvesting, particularly around integrating new renewable fuels, continue to come in thick and fast.

From Europe, Ponsse has announced that they’ve teamed up with Epec, a Finnish technology company whose technology is already being used in electric and hybrid-electric commercial vehicles, to develop a fully electric log forwarder with a 15-tonne load-carrying capacity. And Volvo Trucks are testing vehicles using fuel cells powered by hydrogen – the idea being that a truck will only emit water vapor, produce its own electricity onboard and have a range of up to 1,000 kms.

And in New Zealand, the country’s first diesel-electric harvesting machine has just begun operation. The hybrid harvester is paired up with a forwarder machine and is being used in a production thinning crew. A video has been built into the story this month with Josh Hurring from Mike Hurring Logging explaining just how the new machine’s operating and advantages that they’re seeing in their Southern harvesting operations.

Check out these stories and much more below. Enjoy this month’s issue.

Remember, please send through any stories or video you want us to pass onto the wider wood harvesting and log transport community.

If you haven’t already, you can subscribe to this email newsletter.