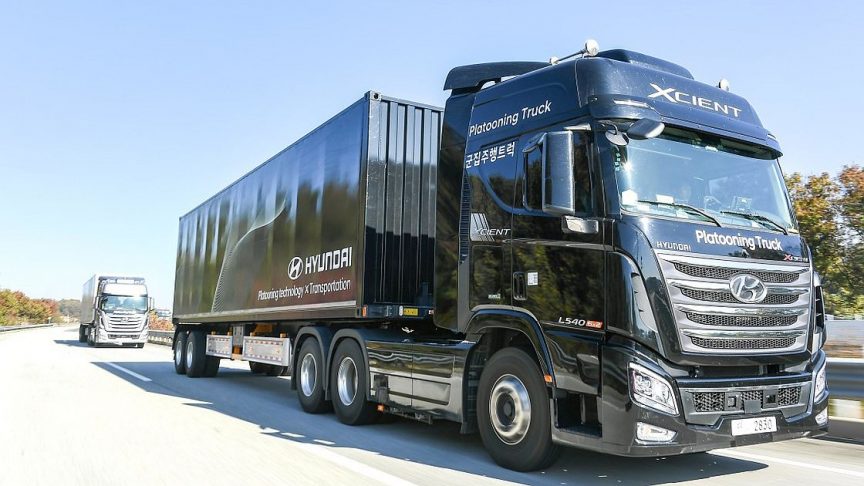 Autonomous driving technologies could significantly shape the future of trucking over the coming decade, and as we’re continuing to see through various trials around the world, platooning may play a big part in this transformation. By sending a pair of self-driving trucks down a test highway in South Korea, Hyundai has now carried out a platooning trial of its own, in which it says the vehicles successfully demonstrated some key platooning maneuvers.

By enabling trucks to autonomously follow each other in a neat formation, truck platooning could bring a whole host of benefits to the freight industry. These include a reduction in the number of accidents and congestion along highways, as well has potentially huge savings in fuel and therefore CO2 emissions.

Daimler, who has tested its own platooning technology on US highways, expects that it could improve the economy figures of its trucks by as much as 10 percent, owing to the ability to tightly follow in the slipstream created by a leading vehicle.

Like others in the field, Hyundai’s platooning technology centers on vehicle-to-vehicle (V2V) communication, enabling trucks in the fleet to be aware of things like each other’s speed and precise position on the road. This was put to the test along a 7.7-km stretch of highway in central South Korea, which the government has set aside as a testbed to develop autonomous driving technology.

The test saw two connected Hyundai Xcient trucks take to the highway, along with other autonomous testing vehicles that Hyundai says helped to simulate real-world driving conditions. With platooning mode engaged, the following truck trailed the leading truck by 16.7 m, automatically adjusting its braking and acceleration to keep that distance constant.

Other skills on show included simultaneous emergency braking, a shared video feed from the leading truck and an ability to adapt to other vehicles cutting in between the two connected trucks. When this occurred, the trailing truck automatically increased its trailing distance to 25 m.