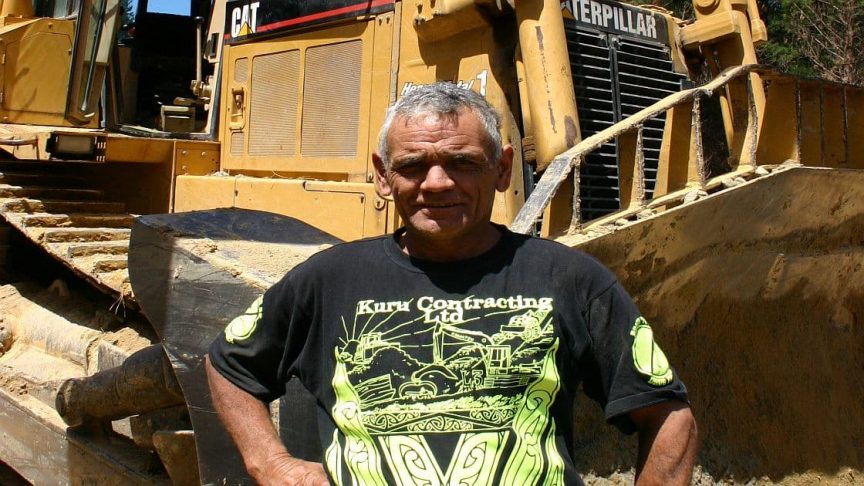 “Jack Kuru – the legend road builder”. These words are scribed on the wall of the Wairangi Whare as a reminder of Jacks time in Wairangi Forest road building in the early 2000s.

I remember vividly the day Jack’s D8 bulldozer was on the transporter heading to Wairangi forest to embark on a new road line harvesting and road construction contract. And when asked, Jack what are your longer-term goals, he replied, I would like two D8 bulldozers heading up to the forest. Jack loved his bulldozers.

Jack deemed travel a waste of time so they camped in shearers quarters during the week so they could step out of bed and straight into their machines and maximise hours pushing dirt or pulling wood, working tirelessly in challenging conditions to return home for the weekends. This incredible work ethos spanned over 50 years operating heavy machinery in Manawatu, Papua New Guinea, Palmerston North, Tauranga and all over the Gisborne East Coast region.

Jack and son Ricky formed the successful Kuru Contracting Ltd company in 1997. In 2012 Ricky and Leanne took over directorship with the idea it would take pressure off Jack and allow him to slow down. However, of course nothing could slow Jack and he tirelessly continued to work every day and then of course for a period tirelessly worked with other son Arana to start his harvesting company.

Jack’s experience and knowledge have been integral in the development of the unique roading construction techniques used on the East Coast of New Zealand. Whilst Jack loved his bulldozers, when faced with a new challenge of building roads on the steep Papa rock terrain he was the first on the east coast to implement a very large 70 tonne excavator. There was some criticism at time but soon afterwards all other forest road builders who were faced with similar challenges followed suit and stepped up to using larger excavators as their frontline earthmoving machines.

Jack has mentored, taught and educated hundreds of workers on the East Coast, some of whom have gone on to own and operate successful businesses of their own. Jack has been recognised in the east coast forestry community winning numerous Eastland Wood Council Awards for his Excellence.

Jack in many respects came from the school of hard knocks, work hard, play hard and big toys. I have had the pleasure of working with Jack and Kuru family for many years since 1999 and laughed over many stories. I recall the story of Ricky as a very young boy. Jack had purchased Ricky a motor cross bike. Jack obviously would not muck around starting him on something small and instead purchased an adult size race bike.

Jack welded an extension on the bike-stand so Ricky could stay upright at the start line on race day. Ricky unable to touch the ground was told when the flag drops to open the throttle wide and do not fall off. Well, you could say that Jacks mentoring, father figure pulled the throttle wide-open for the Kuru family and reason their subsequent businesses are so successful.

But above all else, Jack the legend road builder was a beautiful, lovely man and many of us in the forest industry loved him dearly. The wisdom Jack passed on is in my mind and his love is in my heart forever. Jack passed away earlier this week after a long illness. Rest in peace Jack.