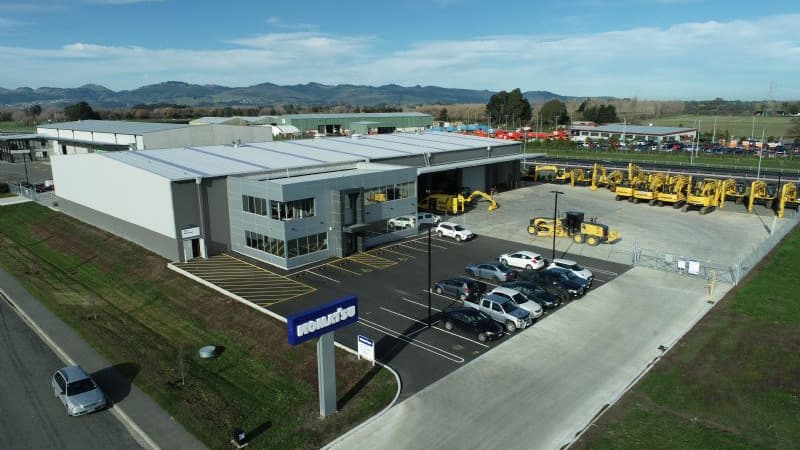 The state-of-the-art facility, which was commissioned late mid-2020, offers greatly enhanced service and support capabilities for Komatsu customers throughout the South Island.

It was officially opened by Christchurch Deputy Mayor Andrew Turner in a ceremony attended by key Komatsu customers and suppliers from throughout the South Island, as well as senior Komatsu New Zealand management.

“It’s great to see Komatsu’s continued commitment to Christchurch and the South Island,” he said.

“This additional investment means that the service they are offering customers from here in Christchurch is enhanced and contributes to greater economic activity in our city.

“We welcome this and wish them all the best with their new facilities,” said the Deputy Mayor.

Rob McGregor, Komatsu NZ’s South Island Regional Manager said its new South Island Hub has already proven to be a huge step forward in terms of the service and support the company can now offer customers throughout the island.

“With a total of about 10,000 sq m of floor space, including an eight-bay workshop and two-bay warehouse, it’s nearly three times bigger than our former facilities,” he said.

Since opening its previous Christchurch facility in 2007, Komatsu has grown from six staff members to the point where it now employs nearly 30.

And since the SI Hub’s commission, it’s added more service and technical staff, as well as a trainer with expertise in iMC (intelligent Machine Control) operations.

“Today our machine population throughout the South Island is more than eight times larger than it was in 2007 – and it’s continuing to grow,” said Rob.

“That’s a key reason why we’ve significantly expanded our operations and capabilities here in Christchurch.”

“This hub is the latest step in our establishment of a comprehensive nationwide investment in the service and support network that ensures we can continue to meet our customers’ needs no matter where they are based – from the tip of the North Island, to the very south of the South Island,” he said.