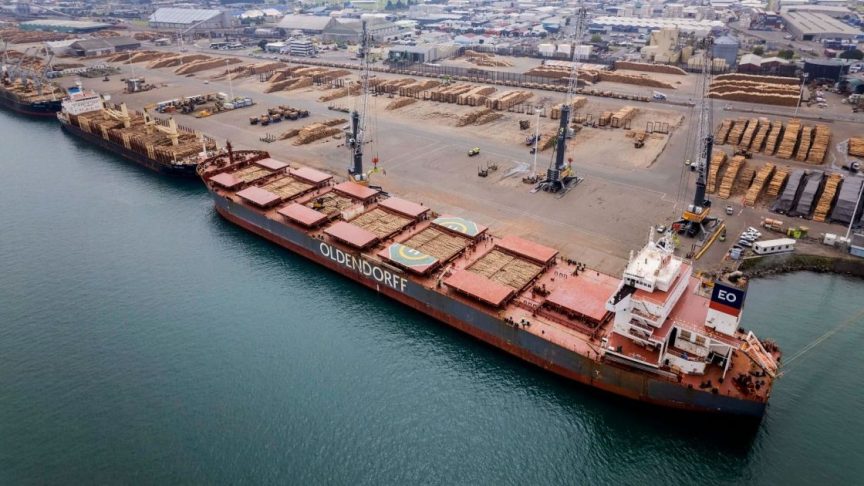 On 10 November Pacific Forest Products Ltd (PFP) completed the loading of the largest log vessel ever to load from Australasia. The Conrad Oldendorff was chartered by PFP’s subsidiary South Pacific Shipping Ltd (SPS) from Oldendorff Carriers with the aim of creating new economies of scale through the port of Tauranga.

The Post Panamax vessels have no ships cranes and so are only now possible utilising the new ISO Stevedoring Liebherr shore cranes. The vessel is 230m long compared to the average logger of 180 m. Combined with a beam width of 38m this vessel loaded twice as much as a standard log vessel.

The cargo of over 60,000 m3 was loaded entirely underdeck and went smoother than expected – especially as this is the first time a vessel such as this has been seen in NZ. It was loaded with an average of 4 “gangs” (4 holds loaded at once) which is better than the standard port average.

Ian Leslie, Operations Manager for PFP, noted that the vessel needed the cooperation of the entire supply chain for it to become possible“. From the outset there was a lot of effort to get this project across the line – initially from the chartering brokers Braemar AMC, Oldendorff Carriers and SPS and then with Port of Tauranga and ISO.

Our major forest owner log suppliers were on board with production as they could see the benefits of a large single port loader vessel.” With the efficient and safe loading of the Conrad Oldendorff now completed it is likely that we will see more of these vessels loaded by PFP in the future at ports that have shore crane facilities.