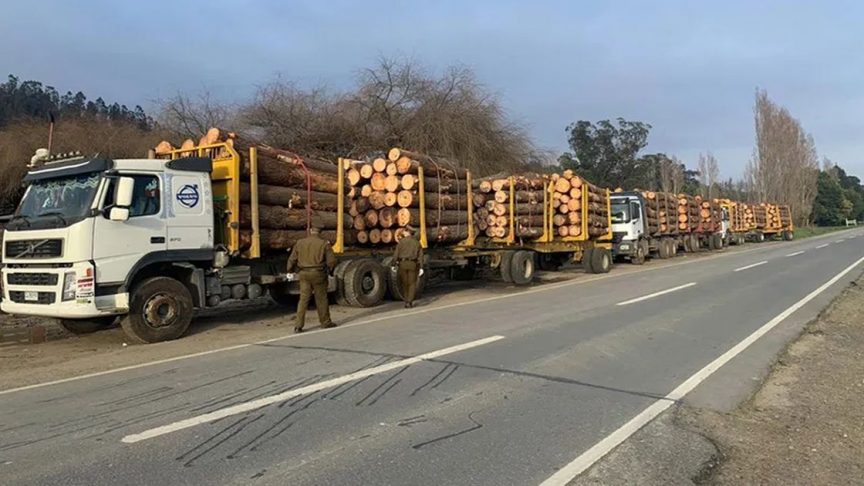 Authorities in Chile’s southern province of Arauco have intercepted a string of trucks carrying massive loads of stolen pine wood, revealing just how common it for timber traffickers to pilfer wood from legal plantations in the heart of the country’s logging industry. In mid-May, police revealed they had seized seven trucks loaded with 161 meters of stolen pine wood, worth an estimated $10.5 million. All seven drivers were arrested in connection to the seizure, according to media outlet BioBioChile.

Authorities intercepted the trucks in the commune of Los Álamos along Route 160, a highway cutting through the northern part of Arauco province. BioBioChile reported the wood had been stolen from the Cuyinco Farm in Los Álamos, which is owned by Bosques Arauco, S.A., a company that operates sawmills and planing mills. The alleged theft came on the heels of a similar case in late April, when police intercepted three trucks whose drivers allegedly stole pine wood from a property owned by forestry company Forestal Arauco SA in the commune of Arauco, in northern Arauco Province.

Just two days earlier, a truck was seized and its driver arrested. The vehicle was allegedly transporting stolen timber from another property owned by Forestal Arauco in the same commune, El Líbero reported. Two other trucks involved were able to evade capture. In response to increased thefts, a group of Chilean transport unions recently published an open letter that asked officials in the nation’s congress to push through bills against the crime that are currently being debated in Chile’s Chamber of Deputies (Cámara de Diputadas y Diputados). The bills seek to increase penalties for those who steal wood, to typify the crime and to give authorities greater powers to tackle it.

In January, Juan José Ugarte, president of the Chilean Wood Corporation (Corporación Chilena de la Madera A.G. – Corma), said total losses from wood theft in the legal forestry sector had more than tripled over the last three years. In 2018, losses amounted to $20 million. This figure rose to $45.2 million in 2019, before reaching some $67.8 million last year. Most timber theft in Chile is committed in the southern provinces of Arauco and Malleco.

Arauco is at the center of increased timber theft in Chile for three main reasons. First, legal timber harvesting by forestry companies operating in the province is widespread. This leaves ample room for timber theft to occur. A report published by La Tercera last September revealed pine and eucalyptus plantations in Arauco cultivated by forestry companies are targeted by armed groups.

Pine trees require up to 12 years of cultivation before they are ready to be harvested, while eucalyptus trees take up to 14 years. When the trees are ready to be chopped, armed groups threaten workers and start logging with their own equipment, according to an executive working for a forestry company consulted by La Tercera. The wood is then picked up by drivers receiving it on behalf of timber traffickers. These drivers use the same routes as those transporting legal timber.

Second, Arauco has long been plagued by an ongoing rural conflict that timber traffickers exploit to access wood stolen from forestry companies. Age-old grievances between members of the Indigenous Mapuche community and the Chilean government continue to play out in the province. A radical faction of the Mapuche people has long demanded the return of ancestral territory they say was unlawfully taken. This conflict has stoked acts of resistance, like timber theft and the burning of forests exploited by forestry companies in the province. This means readily-chopped, stolen wood is easily collected by drivers working as intermediaries between those cutting it down and criminal networks selling it on to domestic and international markets.

Finally, a lack of state presence in the province facilitates timber theft. According to René Muñoz, president of Chile’s Forest Contractors Association (Asociación de Contratistas Forestales – Acoforag) this has created a “favorable environment” for cattle rustling, arms and drug trafficking to flourish in Arauco, alongside wood theft.

Author
FIEA
Reply to  S A

Good spotting. Something must have been lost in translation.