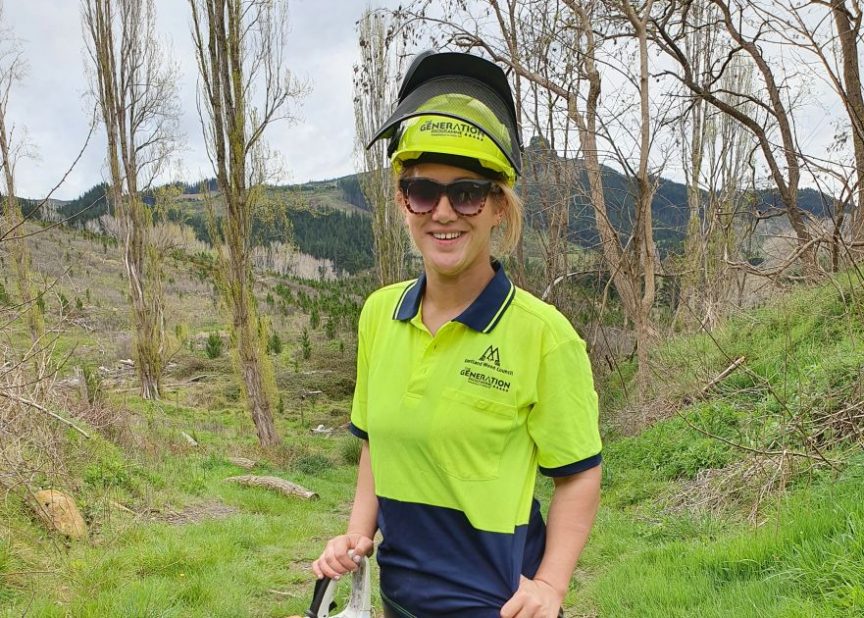 Learning with the Generation Programme has proved life-changing for 22-year-old Ariana Ngaronoa and she’s already lining up more study to pursue a career in forestry that she previously hadn’t considered.

“It is amazing,” she says. Plenty of Ariana’s extended whanau are in the industry but it wasn’t until a friend suggested the programme to her that her world changed. For her, it is all about a connection with the land. “That is very important to me.” But she was still a little reluctant to step into the programme. “I was just unsure but Siobhain (Fyall – the Generation Programme manager) kept calling and in the end encouraged me to take the risk. I am so happy that I did.”

Since she started the programme, her friends and whanau have noticed a difference in her. “Everyone within the programme is so supportive and helpful. Siobhain and our tutors really keep us on our toes and are really generous in sharing their knowledge – and they are patient!”

Her study bounces between the classroom and the forest. “We get to learn our theory andthen put it into practice in the bush. At the end of the day, it is all about the effort you put in.If you want to learn, you will do really well.”

Her attitude comes from way back. Ariana grew up with her grandparents Rocky and Lovey Pardoe at Manutuke. By her own admission, they set solid foundations and instilled in her a strong work ethic, but when her nan died on Ariana’s 16th birthday her world changed. “It was just so upsetting and for a while I went a bit off the rails. I just had no direction but was lucky to have an awesome support system around me.”

Her parents Donna Tichborne and Aaron Ngaronoa were right behind her too. “Mum always madesure I had anything I needed even when she was struggling and the same with my dad too . . . he is what I think is the definition of what a hardworking man should be.” Eventually she ended up working for a local roading company which began the change in her perspective. “Just being outside and working. It is a thing for us as Maori to be connected to the land.”

For Ariana, being on the Generation Programme is bringing a true sense of fulfilment that she didn’t know was missing in her life. “I definitely see this as my career, and next year will start the diploma. Siobhain and our tutors make things seem possible where they weren’t before. They have been awesome to help me figure myself out.”

She’s quick to add there is no sugar-coating of things on the programme, and the tutors are “straight up” about what they expect from their trainees. “There’s a whole lot of different types of people who come through the doors but it is awesome to see so many mana wahine involved in this.”

Ariana wants to get her diploma in forestry management so she can start making a difference and next year will get her diploma studies underway. “I can be part of the decisions that count for our land for the future. I know there are a lot of ways thing can be changed within forestry around land use,” she says. “It is really excited to be a part of this.”

While shy about being a role model for others who have struggled to find their way, Ariana says it would be nice to think they could see a way forward thanks to her journey. “You can do it,” she says. “Being sad about stuff wastes time. Focus on what you can do, apply those changes and maybe later on you can fix the other issues and get yourself to the peak.”

The Generation Programme, which is under the umbrella of the Eastland Wood Council and funded by Te Uru Rakau and the Forest Growers Levy Trust, gives people a chance to see what the forestry industry offers and the variety of work available. It starts with a six-week base camp to get work ready, then once in work the study continues until trainees complete their Level 3 qualification. Training for the Generation Programme is provided by Turanga Ararau.