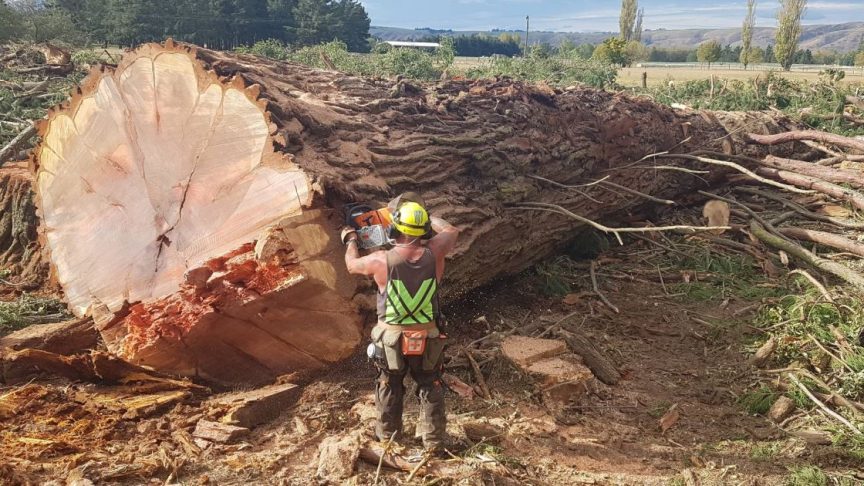 This log is from a Sequoiadendron giganteum. The tree’s common name is either Giant sequoia or Sierra Redwood. It has also been given a nick name, “Wellingtonia” with history suggesting a man by the name of John Muir gave it this title in memory of the Duke of Wellington. Giant sequoia is one of three of the last remaining closely related Redwood family of trees.

It is also one of the oldest living trees on our planet with one in the USA having been calculated to be over 3,200 years old. It was able to evolve through the eons as it developed the very thick. This enabled the tree to survive fire where the heat could not boil the vital food carrying cambium layer on the outer edge.

This log came from a tree planted in 1870. It likely started as a plant bought over on a sailing ship or as seed imported from the USA. The tree was planted at Albury Park, Albury in South Canterbury, by Richardson, an engineer who it is understood was gifted Albury Park by the Government for having designed the Lyttelton Rail tunnel.

The tree had to be felled in April 2019 when it was 149 years of age due to deterioration in tree health. It was estimated to be 43 metres in height. It was generously donated by Albury Park owners, Andrew and Rachael McGregor.

Cook Logging Ltd from Pleasant Point had to blow the dust off an old bar for this one! A butt log was cut at 6 metres long and was 3.1metres diameter at the large end. The log weighed 21.5 tonnes when it lifted by a fifty-tonne crane on to a transporter and taken to Bushtown in Waimate where it will remain on display for many years.