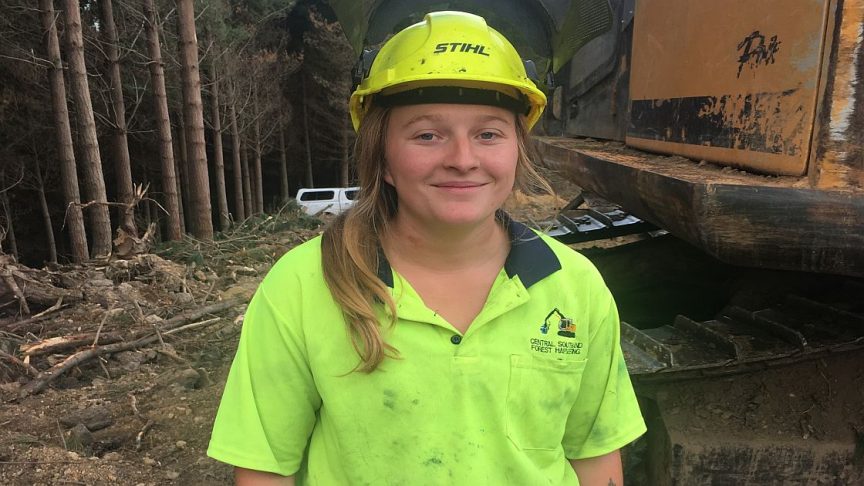 Paige Harland was born to be in the bush. Miss Harland (21) comes from a Southland family who have sap in their blood over three generations. Named apprentice of the year at the recent 2019 Southern Wood Council Forestry Awards, she works for Harland Brothers Logging.

The business was established by her grandfather and great-uncle, later taken over by her uncle Peter and is now run by her cousins Jesse and Corrie Harland. Being in the family business was “awesome”, particularly as they were now working on blocks that earlier generations had cut down 30 years ago, she said.

Miss Harland grew up in Winton and, after leaving school, worked for Country Manor Catering, doing food preparation and waitressing. But after 18 months, she decided she needed an outside job and she was keen to give forestry a go, given the family interest, she said.

She started with her stepfather Russell Diack’s crew Central Southland Forest Harvesting in May 2017. She was then given the opportunity to be in the first intake of apprentices at Mike Hurring’s training school in Balclutha.

Along with five other young new forestry entrants, she progressed through the five block courses to attain her level 3 basic machine operator and landing level 3 certificates. Through further training and assessment, she had now gained two level 4 qualifications – advanced log making and advanced loading.

The citation for the award said she was a quick learner and had picked up chainsaw skills very easily, becoming a highly skilled log maker in the crew. Transferring to machines, Miss Harland quickly became adept at sorting and fleeting logs, then loading trucks. Her skills improved to the extent she was loading all trucks sent off site daily.

After a brief spell from the industry driving big rigs for Peter Baker Transport, she was now back in the bush. Bill Tredinnick, who has worked with Miss Harland over the past two years as an auditor-trainer for IFS Growth, said she arrived with little experience but he believed the logging in her blood showed in her progress and development.

“Paige took to logging like a duck to water, she was quick to give any job a go and she picked up skills very quickly.” Her attitude resulted in her “working in conditions that would make most cry – mud, water, snow and ice” and, being in Southland, she “would get this all in one day”.

Over a short timeframe, Miss Harland had gained a “tremendous” amount of new skills and become a very effective and safe forest worker. Miss Harland said only one other young woman was working in the industry in Southland and Otago and she was in the same crew as her.

While the industry might be perceived as being more of a job for males, she reckoned women were just as good – “if not better”. Plus, they were “gentler on the gear”. Her gender had never really been an issue; the crews had always shown her respect and were always there if she needed any help.

Starting out on chainsaws, it took a little time to get used to holding one all day while being out in the challenging weather. Wielding a chainsaw in -4degC conditions in winter might not sound appealing, but it was something she had got used to. Working in the summer months made up for that, she said.

She recommended forestry as a career for young people – male or female – saying there was lots to learn in the bush, and lots of machinery to try out. “The only way you get experience is just by getting out and doing it yourself.”