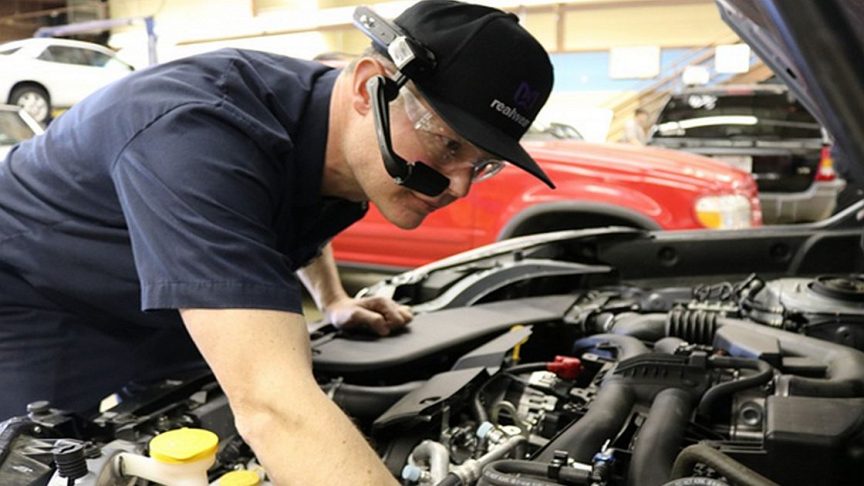 RealWear is a leading manufacturer of head-mounted tablets. The lightweight headset has a narrow “boom arm” with a “micro-display” that appears as though the worker is viewing a 7” tablet screen. The screen can be positioned just below line of sight, so the user can easily see glance on the screen like a dashboard. To keep the experience completely hands-free all inputs are entirely voice-activated.

“Essentially, it’s a ruggedized tablet computer completely optimised for hands-free use that clips on a hard hat,” Company-X AR/VR specialist Lance Bauerfeind explains. “It runs off the Android operating system and apps, so we can write customised apps for our clients, exactly like you can for a tablet. The core functions that are built into the headsets are the voice command functionality that has been enabled for all existing apps and navigation.”

Lance and his team first came across RealWear’s HMT hands-free wearables when looking for a device for a client’s onsite inspections and audits. They had already tried a competitor’s device but found the first option blocked the user from seeing people, which was a barrier. The HMT-1 or HMT-1Z1 is designed specifically to maintain situational awareness while improving productivity.

“We’d heard of RealWear,” Lance explains, “but were initially sceptical of the smaller screen. Our concerns were unfounded as it is very user friendly as the screen is mostly a reference check for the voice commands.”

One project using RealWear HMT, Lance outlines, is a proof of concept with off-site monitoring requirements. “The challenge was to help technicians onsite at remote distribution hubs. The technicians carry out repair and maintenance on site so using the HMT needs no computer or laptop. Because it’s hands free, users can carry on working, so for testing, inspecting, repairing functions, troubleshooting is going to be more efficient”.

The device can also be used just like a smartphone for remote voice calls. Users can also share camera feed for picture-in-picture video calling. This means a technician can discuss an issue, record it and save it. Information stored in the device is synced back to their corporate systems.

Anything you can do with an app on your phone, you can do through this headset but just using voice commands instead of tapping the screen. The opportunities in the wearable devices space are significant. Think now of maintenance, on-site repairs in out of the way locations …..