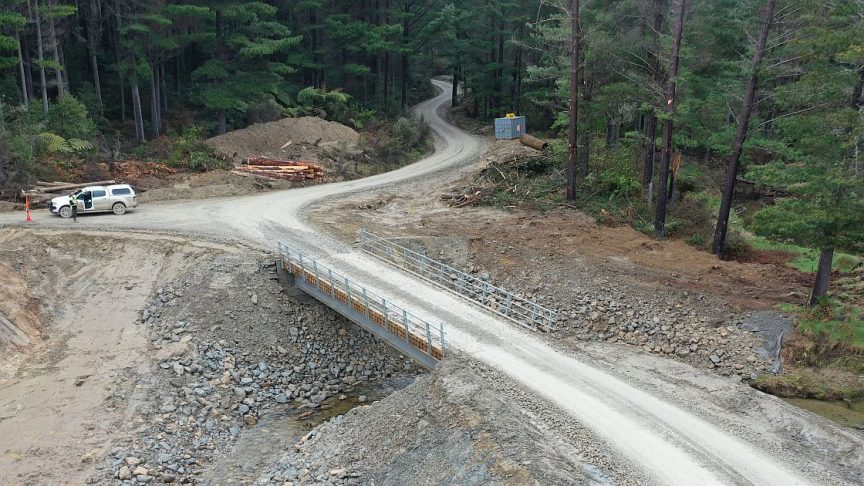 A bridge designed to carry heavy forestry loads is a substantial capital investment – but what if you could relocate that bridge and use it across multiple harvests? That’s exactly what Juken NZ Ltd (JNL) decided to do when commissioning two new bridges. In a first for Bridge It NZ, both crossings are designed to be disassembled in the years to come and moved to new sites within JNL’s forestry estate on the North Island’s East Coast in New Zealand.

“A lot of our forests are still in their first rotation and we have identified a handful of other sites that are likely to require bridges in future,” explains JNL’s Planning and Engineering Manager Patrick Bethel. “So having the ability to pick a bridge up and transport it elsewhere – at a fraction of the price to build a new one – is an ideal solution. We can move them to suit our harvesting and heavy traffic requirements.”

The first bridge at Rata Road, Wharerata (just south of Gisborne) was installed in August 2020. An existing culvert had blown apart during a storm many years ago, and until now JNL hadn’t required access to that particular block in the Pamoa Forest so the issue remained unresolved.

Pat weighed up the cost of installing another culvert versus building a bridge. The ongoing maintenance costs required to keep culverts clear of debris to avoid scour and erosion issues meant a bridge would be cheaper in the long-run. Bridges also provide greater clearance and flow capacity and are a better ecological option for native fisheries.

“We looked at the real cost – not just the installation. The maintenance you can spend on culverts and pipes can get pretty hefty, pretty quick. And that’s where the bridge really shines for us. It’s pretty much a case of ‘put it in, walk away’ and not have to worry.”

A second relocatable bridge will be installed at ‘Centre Track’ in late 2020. Together, both crossings will give JNL the ability to access and harvest around 425,000 tonnes of wood from the Pamoa Forest in the next four to five years. Another significant benefit is the two bridge crossings will shave 24km off each round trip to the harvest site, allowing JNL crews to avoid some treacherous roads and saving an estimated NZ$1 million over the duration of the upcoming harvest.

“The second bridge will provide a shorter haul route for a lot of the Pamoa Forest. It takes away our reliance on a very shaky back-country council road that JNL and other forestry companies have probably already spent a NZ$1 million worth of maintenance on already. We will be able to go internally out of the forest via the new bridge and avoid a big ugly climb and a big ugly road.”

JNL chose to deal with Bridge It NZ because their solution was effective, economic and the best environmental decision. Pat says the company’s advice, service, execution and delivery was excellent.

“We were delayed a couple of times along the way because of COVID-19. But Bridge It NZ were great at communicating with us. The situation was difficult, but they were easy to deal with and very forthcoming with what was going on.”

Despite being fully briefed on the design, Pat was blown away by the finished Rata Rd bridge, saying it was a lot more impressive than he was expecting. “It’s a big boy. There’s nothing that even makes me question putting machines up to 70 tonnes over it.” Pat’s advice to other forestry companies who face a similar challenge is to carefully weigh up the long-term maintenance costs of each option – not just the upfront build and installation costs.

As part of this project, Bridge It NZ visited and surveyed other potential JNL sites to ensure the initial bridge design would provide an appropriate crossing solution elsewhere in future. Bridges are designed to last so the true capital cost of building a relocatable bridge diminishes when it’s used time and time again.

“Because we’re investing money to build these bridges, I want to make sure we can get the most we can out of them,” Pat says. He has factored at least one future move per bridge into his costings, however there’s no reason why they couldn’t be moved several times. In 30 years if it was still something we could pick up and move, we could take it right back to where it all started and put it back in place at Rata Rd. Everything will be there to use again.”