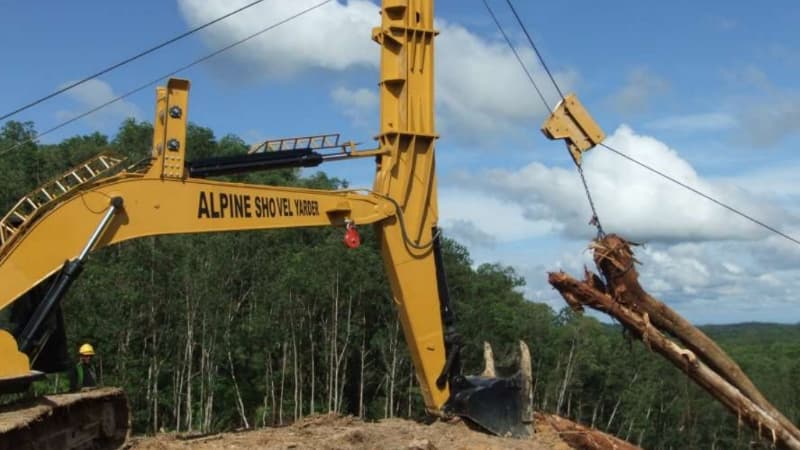 Market conditions, such as log and lumber prices, harvesting costs, shipping costs and exchange rates, and logistics constraints such as availability of harvesting crews, log transport capacity and harvest planning factors, will drive the decision as to whether these forests will be harvested. Cable harvesting costs, a critical component affecting the economics of harvesting steep terrain forests, have steadily increased over the last 8 years in New Zealand from $32.40 per tonne in 2009 to $39.40 per tonne in 2017 (Visser, 2018), due to increasing labour and machinery costs.

The combination of increased wood availability from small forests on steep terrain, in locations remote from mills or ports means that harvesting systems must be carefully matched to these conditions to avoid high cost harvest access and harvesting. A new report, a Technology Watch report just produced by Forest Growers Research details a new excavator-based yarder, the Alpine Shovel Yarder, now working in New Zealand, that has the potential to reduce harvest access and harvesting costs, and is particularly suited to harvesting small, steep terrain forests.

Excavator-based yarders, also known as ‘Yoaders’ in North America and ‘Shovel Yarders’ in other parts of the world, are not a new development. An excavator yarder concept was described in 1990 as a response to the need for efficient and environmentally acceptable logging systems in the U.S. (Skurdahl, 1990).

Renewed interest in excavator-based yarders has lately been seen in New Zealand. Electrical and Machinery Services Ltd of Rotorua is the manufacturer of the Harvestline excavator-based yarder (E.M.S. 2018). A recent survey of yarders in 2018 identified 20 excavator yarders working in New Zealand (Harrill & Visser, 2018). This type of cable yarder represented 6% of the total number of yarders in New Zealand, up from 3% in 2012, when the last survey was undertaken. The Alpine Shovel Yarder is a recent addition to the numbers stated above.

This model of excavator-based yarder is ideally suited for extracting trees over a maximum of 450m distance on medium to steep slopes in both large scale and small-scale forests. The machine is highly mobile, it is simple to operate, is less capital intensive than larger swing yarders, and is designed to operate safely without the need for guy lines to stabilise the tower. The full report produced by FGR can be read here.