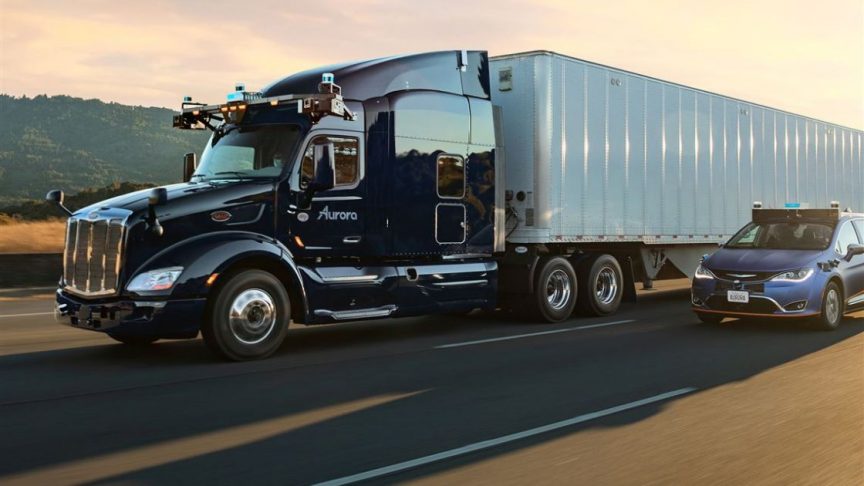 After lumbering through a gravel parking lot like a big blue bull, one of Aurora Innovation Inc.’s self-driving truck prototypes took a wide right turn onto a frontage road near Dallas. The steering wheel spun through the half-clasped hands of its human operator, whose touch may not be needed much longer.

Fittingly for Texas, these Peterbilts are adorned with a sensor display above the windscreen that looks much like a set of longhorns. This was the beginning of a 45-kilometre jaunt up and down Interstate 45 towards Houston in a truck with a computer for a brain, and cameras, radar and lidar sensors for eyes, capturing objects more than 400 metres out in all directions.

The stakes for test drives like this one are incredibly high for the future of freight. If Aurora and other self-driving startups, including Alphabet Inc.’s Waymo, can convince customers and the public that large trucks can be automated safely, the potential efficiency gains are massive.

The technology would help ease an unprecedented driver shortage, especially for long hauls that keep truckers away from home for weeks. More importantly, the expensive big rigs that carry cargo will be able to roll around the clock, dramatically boosting utilisation.

Aurora has designed and configured the hardware and software it will use to launch a service towards the end of next year in which roughly 20 trucks will ply highways without a human on board. “We’re now in the phase where we are doing the final refinements and the validation system-wide,” Sterling Anderson, the company’s co-founder and chief product officer, said in an interview just south of Dallas.

Aurora is starting in the Lone Star state for a few reasons. Texas is the U.S.’s largest truck freight market and has long, sometimes very boring, stretches of freeway. Its interstate highway network boasts almost a third more miles than second-ranked California.

Texas also has some quirks that are helping teach Aurora’s system how to deal with unexpected scenarios. One is the incessant building and repairing of roads, resulting in 3100 construction sites statewide, including 40 or so on Aurora’s route between Fort Worth and El Paso, Anderson said. There’s also the Texas U-turn, the horseshoe-shaped turnabouts at underpasses below major highways in cities and rural areas alike.

“Any Texas U-turn is going be a slightly different situation on account of who’s around you and what they’re doing,” said Anderson, the former head of Tesla Inc.’s Autopilot. “It’s tricky for humans, too.” It took about a month for Aurora’s sensors and software to master the Texas U-turn, which allows vehicles to reverse course on a highway without hitting a stoplight. The manoeuvre requires the autonomous truck to yield to traffic coming at it from multiple sides and part of the methodical learning Aurora’s computer does with each test run.