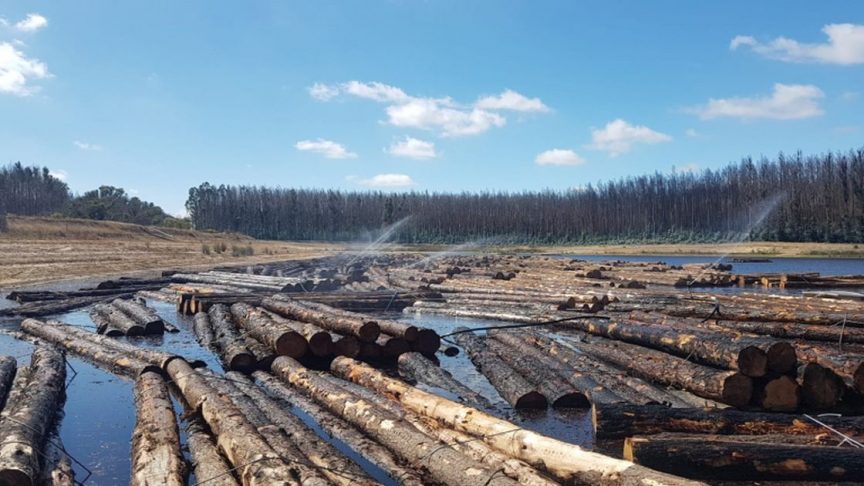 Sprinklers have been activated at the dam on its Macgill property where KIPT plans to store more than 100,000 tonnes of pine. The pine logs, harvested from the fire-damaged Gosse West plantation will be preserved in preparation as the company awaits approval and construction of the Smith Bay export facility.

KIPT plans further storage facilities on other properties it owns in the West End of Kangaroo Island as it acts to preserve its premium logs, which make about half of the 500,000 tonnes of pine it plans to harvest by the middle of 2022. The remaining fire-damaged stock – about half of the Company’s pine estate – will be left on site in the plantations for later collection for other uses as feedstock for future biomass operations.

Bundles of logs already in the dam are about 80% submerged “like icebergs” and the sprinklers will keep the top logs moist and assist in submerging the bundles completely.

KIPT operations manager Rob Heathcote said the system had been developed using intelligence from previous water storage in the South-East after the 1983 Ash Wednesday bushfires and with the assistance of Harvestco, the company’s harvesting contractor.

“Storing these high-quality logs in water prevents access to oxygen for bacteria and fungi, which can impact the quality of the timber. Burnt pine will deteriorate over time so it’s important to act quickly,” Rob said. KIPT had consulted with regulatory bodies regarding the water storage and will monitor water quality and implement measures to prevent logs and debris escaping into other water courses.

Meanwhile, KIPT continues to find ways to export logs from the Island in relatively small loads as an interim measure because it will not have enough water storage capacity for its pine. The pine makes up about 20 per cent of the KIPT estate and planning for harvesting and exporting its blue gums continues.The first barge-load of pine logs from Kingscote wharf is scheduled for Thursday. The 300 tonnes of logs will be shipped to Port Adelaide and will be containerised and shipped to a South Korean customer.

Photo: Logs under sprinklers at the Macgill plantation