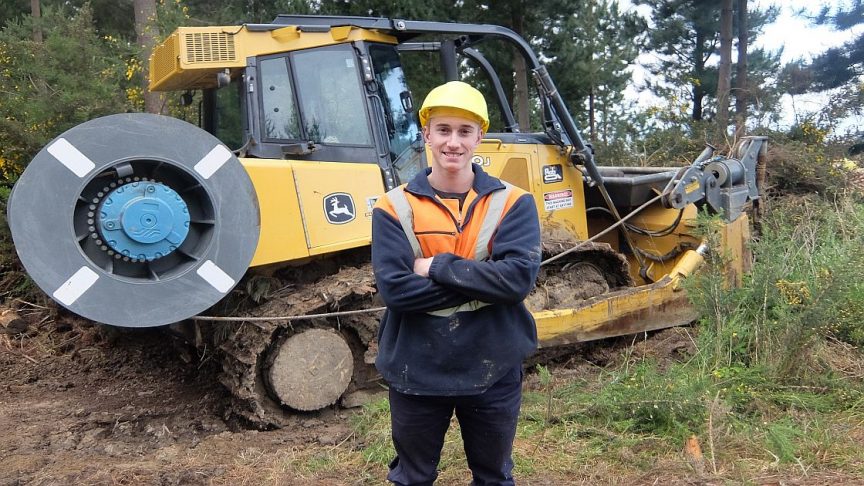 Scott Thomas is a young man with an exciting future. Aged just 21, he is currently working for Gamble Forest Harvesting in a fully mechanised 8-man hauler crew in Otago. Scott has found his passion, and that is driving big harvesting machines.

I caught up with Scott in Flagstaff Forest, part of the City Forests estate high above Dunedin, during a visit with Kevin Marsh, City Forest’s harvesting and OSH coordinator. Here the crew was operating at full tilt, with a daily harvest of 500-600 tonnes of second-rotation radiata pine. This equates to 18-20 truckloads of logs leaving the skid site every day.

“I really like operating the machinery,” says Scott, who left school at 16, and went straight into the bush – or rather, into the machines that work in the bush. He has only ever worked in mechanised operations, and joined Gamble Forest Harvesting early in 2018 after stints with a couple of other Otago contractors.

Scott is now being trained to operate a relatively new addition to the array of big machines operated by Gamble Forest Harvesting. This is a winch-assisted John Deere 909MH self-levelling feller-buncher, which on steeper terrain is attached to “ROB” – a 850j John Deere Remote Operated Bulldozer. ROB carries two 500-metre steel cables which secure the harvester from up-slope. All ROB operations from starting the bulldozer to operating the winch can be controlled from the cab of the feller-buncher, so making for a multi-million-dollar one-man operation.

“It’s an unreal piece of kit,” says Scott. “I’ve been really lucky because Tony (Gamble) has taken the time to train me. Tony is the expert – he still handles all the tricky stuff. There’s nothing like learning on the job with these machines, and it’s not every contractor that has time to train people.”

Scott reckons he can operate nine of the eleven machines on-site and is adept at processing, skidding and loading. He is climbing the qualifications ladder quickly, and has been working his way through a raft NZQA certificates, recently completing his National Certificate in Forest Harvesting Operations.

“I learn new things every day at work,” says Scott. “I learn about operations, but also about safety and how to look after the environment.” Owning and managing his own crew is on Scott’s list for the future. “First I need to learn how to plan and optimise harvesting operations.”

Scott also reckons he has a few big advantages over his mates, some of whom are tradesmen, others who have been to university. “I may have to get up earlier than them, but I have a great job and I earn more than most of my friends. Also I think forestry’s reputation as a dangerous industry is unfair. We have the best health and safety systems of any industry; there are huge precautions in place.”

Gamble Forest Harvesting is a certified contractor, and has worked for City Forests for many years. Owner Tony Gamble likes his crew members to be versatile, so they are all trained to operate multiple machines. “What I’m looking for are intelligent, motivated people,” says Tony. “We’re seeing more mechanisation and automation all the time, so it’s all about people’s attitude and versatility. Scott works hard and is really keen to learn, so he has all the right attributes and I’m happy to spend time training him.”