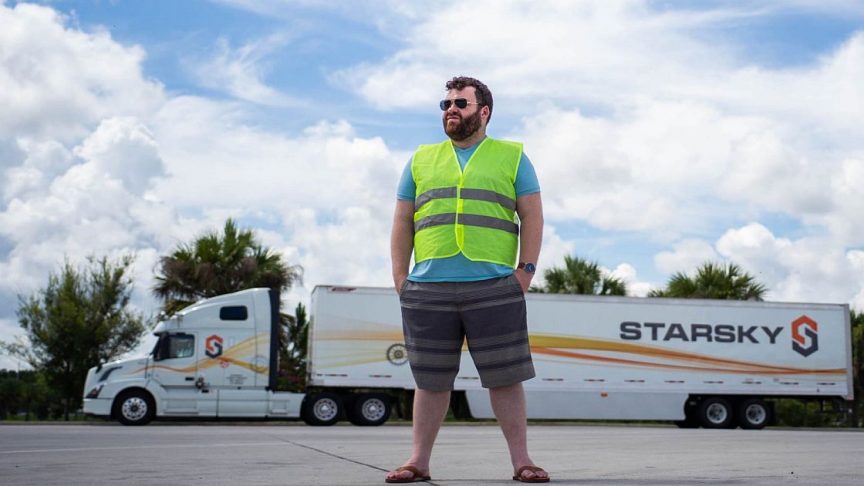 Starsky Robotics is now testing autonomous trucks that have no driver inside, the San Francisco Bay Area start-up announced. As of June 16, Starsky began operating truly driverless semi-trucks on the Florida turnpike.

It’s a first in the industry. To be sure, there are plenty of autonomous trucks on the road. TuSimple has a fleet of more than 50 trucks making three to five revenue-generating routes per day in Arizona. Waymo resumed testing its self-driving trucks in Phoenix, after ending the tests two years ago. Embark’s trucks drove more than 124,000 automated miles last year. And Tesla has been spotted testing some autonomous semis.

But these companies still have at least two people in the cabin for safety purposes — usually two truck drivers or a trucker and an engineer. Starksy’s trucks have neither. Stefan Seltz-Axmacher, CEO and cofounder of Starksy Robotics, said his company achieved the industry feat by way of one key difference between Starsky and the rest of the autonomous-trucking cohort.

That is, the trucks do have a driver. It’s just that he or she is remotely controlling the vehicle, and several others, as many as 500 miles away.

“Starsky isn’t so much an autonomous R&D lab as much as we are keen in trying to solve a very distinct problem, and that problem is the persistent long-haul truck driver shortage in US trucking,” Stefan Seltz-Axmacher, CEO and cofounder of Starksy Robotics, told Business Insider.

“Our focus is not so much building general autonomy in this really exciting pipe dream of artificial intelligence that can drive anywhere,” Seltz-Axmacher said. “What we really, really care about is making it so that trucks can drive without a person in them.”

The American Trucking Associations has said that the US has a shortage of 50,000 truck drivers and that the industry will need to recruit and train 898,000 new truckers by 2026. Trucking companies ranked the driver shortage as their top industry issue in 2017 and 2018.

Meanwhile, salaries for truck drivers are falling. A Business Insider analysis found that median wages had decreased by 21% on average since 1980, while in some areas they have fallen by as much as 50%. Seltz-Axmacher said, because of that, there are fewer folks coming into the industry to drive goods across the country.

“The problem in the trucking industry is trucking’s commoditized, so you have a cap on the productivity of a driver, which means you can’t pay them more than $60,000 a year,” Seltz-Axmacher said. “$60,000 a year isn’t enough money to get someone to spend a month at a time in a truck.” But shifting trucking from a job on the road to an eight-hour office job could keep the trucking industry staffed, Seltz-Axmacher said. Some trucking executives see the autonomous feature as a way to cut labor costs. According to a Morgan Stanley report, implementing fully driverless trucks could save the industry US$70 billion per year. Productivity would be up 30% because driverless trucks would run 24/7.