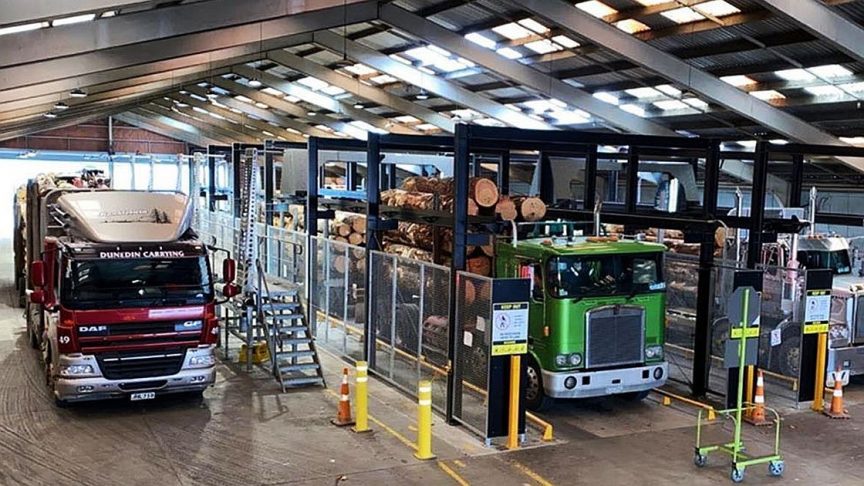 A world-first robotic innovation that scans and measures export logs on trucks has landed its Kiwi developers on the 2020 RBR50, Robotics Business Review’s prestigious global list recognising the 50 most innovative and transformative robotics companies of the year.

Tauranga-based agricultural robotics and automation company Robotics Plus has been named a Global Top 50 Robotics Company for its industry-changing Robotic Scaling Machine (RSM) which automates the accurate volumetric measurement (scaling) of logs on trucks and trailers, replacing manual measurement.

Commercially launched in June 2019, the technology was developed in collaboration with Mount Maunganui-based ISO Limited, which commissioned the first RSM for its facility at the Port of Tauranga and has had it in operation since November 2018. ISO now has eight robots installed across the North Island scaling more than 25% of New Zealand’s 20 million cubic metres of annual log exports. Further installations are planned around the country in 2020.

Dr Alistair Scarfe, Co-Founder and CTO of Robotics Plus, led the RSM technology development. “It’s really exciting to be recognised alongside some of the biggest and best-known robotics, software and automation companies in the world including Boston Dynamics, ABB Robotics, Yasakawa Motoman, Nvidia, SICK and Microsoft,” he says.

Dr Matt Glenn CEO of Robotics Plus, says: “This award validates our collaborative approach to innovation. Our team worked incredibly hard to design and build this world-first log scaling robot in just 12 months by working closely with ISO and a number of other local manufacturing suppliers.”

Paul Cameron, CEO of ISO says the automated process is already having a significant impact as it is a safer, efficient and more productive system than the previous manual system used throughout the world, which requires people to hand scan the logs by climbing between trucks and trailers.

“The Robotic Scaling Machine can automatically scan logs on a truck in 3 to 4 minutes, which compares up to 40 minutes for manual measurement using a ruler. Importantly, it also eliminates exposure to hazards and moves those people into a safer environment and into more skilled roles.”

Mr Cameron says ISO will continue to invest in the robotic technology as it has a clear payback for the company as well as the forestry industry. “We are delivering safer and more efficient systems which improve productivity across the forestry supply chain.”

Steve Saunders, Co-Founder and Chairman of Robotics Plus, says it’s fantastic to see New Zealand’s world-class robotics capability being recognised on the international stage. “The forestry industry globally can benefit enormously from automation. The scaling of logs is traditionally a slow, sometimes dangerous, manual process – so it was well suited to being automated. Due to the success and reliability of the RSM, we’re currently exploring a range of international markets including the US, Canada, South America and Europe.”

Mr Saunders and Dr Scarfe co-founded Robotics Plus to improve the quality, productivity and sustainability across multiple agricultural sectors through automation, via a suite of machine vision, robotics and automation, machine learning and AI, analytics, software and control systems. In 2018 the company completed a US$10M Series A investment with Yamaha Motor Co to accelerate the development of its robotic technologies including robotic apple packers and UGV (unmanned ground vehicles) that can carry out a range of agricultural tasks including robotic harvesting, fruit picking and pollination.

The 2020 RBR50 innovation awards, the ninth annual list of top robotics companies globally, recognises forward-thinking companies and the original, impactful solutions they have created. Widely recognised throughout the world as a leading indicator of robotics innovation leadership, the RBR50 is also a critical measure of robotics sector growth. RBR50 winners were based in the US, Canada, China, Denmark, Germany, Australia, the Netherlands, Switzerland, Japan and South Korea. Robotics Plus was the only New Zealand company named on the list.