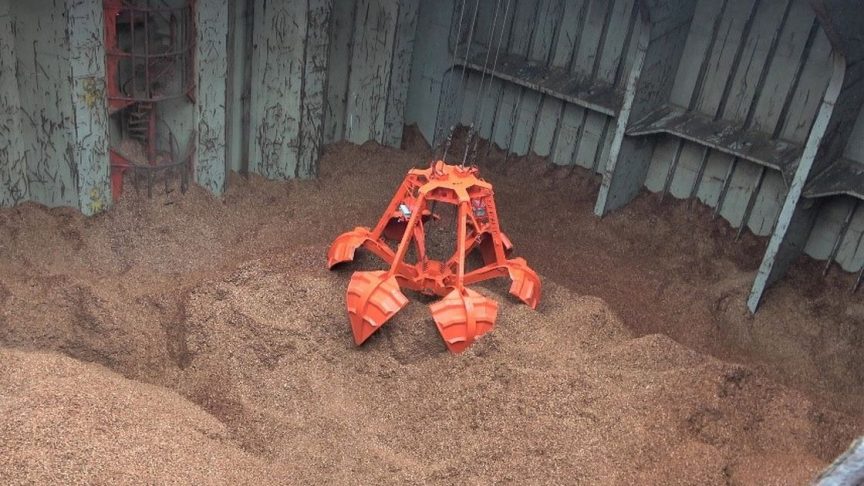 Iknow Machinery, Nippon Paper Industries and Nippon Yusen Kabushiki Kaisha have conducted a cargo handling trial of the world’s first automatic crane operation system, which was developed for wood-chip carriers by Iknow Machinery. The trial was performed at Tomakomai port (Hokkaido Prefecture, Japan) in late August and enabled the three companies to confirm the effect of the system to reduce the burden on wood-chip cargo-handling crane operators.

Wood chips loaded on wood-chip carriers are discharged using a dedicated crane installed on the ship. The discharging work is a repetitive work of capturing the wood chips loaded in the cargo hold of the ship with a special grab that is a part of the onboard crane, pulling the grab up, and throwing it into the hopper (a saucer-shaped stage) installed on the upper deck. Crane operations for discharging work are carried out by professional licensed drivers, not by the ship’s crew. Crane operators usually work day and night, and when discharging all cargo at one port, they work continuously for about three days.

The crane automatic operation system is designed to carry out discharging work once a crane operator uses an operation panel installed in the cab of the onboard crane to select one of the pre-set types of routine movements. Three sensors attached to the grab detect the surface of the cargo loaded in the cargo hold, and they wirelessly transmit a signal to the crane. The grab then rolls down, slows down its speed as it approaches the surface of the cargo, and lands on the cargo. For the sake of safety and efficiency, the system is equipped with a grab fall-prevention function and a hopper full-load detection sensor.

Going forward, Iknow Machinery will commercialize this system by taking advantage of the effectiveness of the automatic system confirmed in this trial. Nippon Paper Industries will consider installation of the automatic system on wood-chip carriers, and will further work to reduce the burden on and improve the work environment of crane operators. NYK will further cooperate in the development of technology to reduce the burden on crane operators, and will work to resolve social issues throughout the supply chain as a sustainable solution provider while pursuing safe operation, which is the basis of ESG management.