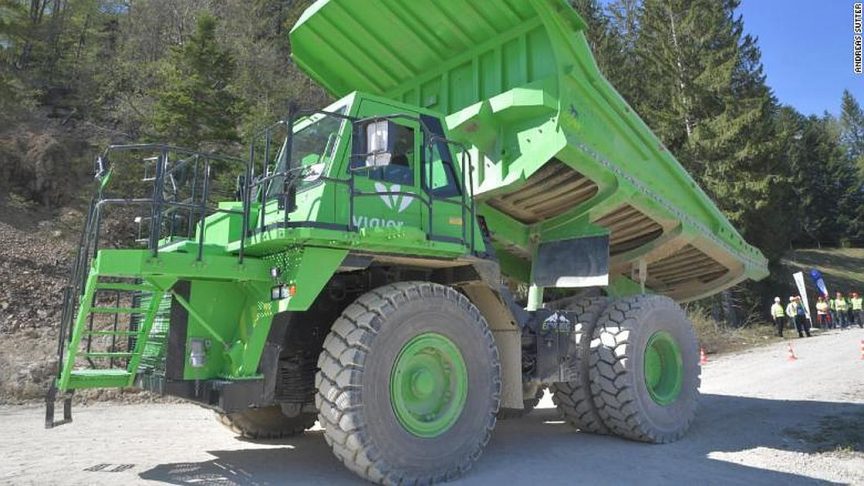 This story is probably timely considering recent announcements on encouraging more electric vehicles onto our roads.

While a single computer used to take up a whole room, now they comfortably fit inside your backpack to be easily carried around. From computers to mobile phones, developments in modern technology mean everything has got smaller.

But the “eDumper” is a very different type of beast. At 110 tons heavy when fully loaded and powered by a 4.5-ton all-electric battery, this dump truck prototype is the largest electric vehicle (EV) in the world.

Produced by Kuhn Schweiz AG, the truck is operating in a mountainside quarry in Biel, Switzerland, and is capable of delivering 60 tons of lime and marl. Like all electric vehicles, the eDumper harnesses power from braking.

Through a process called regenerative braking, the eDumper’s electric motor goes into reverse when the driver hits the brake pads, releasing electricity that can be stored and returned to the battery. And the heavier the load, the stronger the braking and the more electricity can be recovered.

Even Lucas di Grassi – the 2017 Formula E championship winner – was surprised by the eDumper’s regenerative braking capacity. “We had 75 tons of rocks and we went out of here with 90%, went all the way to the top,” di Grassi told CNN Sport. “We arrived with 80% battery, loaded up and on our way back, we recovered 8% so we came back with 88% – that’s actually pretty cool.”